Documentary filmmakers, if you missed DOC NYC (the largest documentary film festival in North America) this post might help. The last time I attended  DOC NYC was in 2019, and no one then could have anticipated that it would take two years for us to gather again. In an unstable industry comprised of many vulnerable freelance workers, from editors to producers, any missed opportunity to nurture the community can be felt viscerally. When documentary filmmakers from all around the world met again at this year’s festival, which ran from November 10-18 (still going on online!) you could feel the collective sigh of relief. Beyond the hundreds of films selected, the PRO Conference curated by Malikkah Rollins, DOC NYC’s Director of Industry and Education, which I was covering for the D-Word with Julie McElmurry (join free to read our coverage!) gathered professionals working in non-fiction looking for answers regarding funding, producing, ethics, and much more. Below is my attempt to capture the most important lessons learned. I did also get to see some great movies – either in person or on the online portal – such as Listening to Kenny G, Storm Lake, Try harder!, The First Wave, and many more. Please take a look at the slate of fantastic films from all over the world still playing before they find their distribution paths!

You may remember my previous article, “When does the rat race end?” about how difficult and depressing being a freelance artist can be, especially within such an inequitable system. We have known this forever, but the pandemic really drove home how crucial it is to continue building and nurturing communities, especially in fragile ecosystems like the arts. Being able to see friends, peers, and colleagues again in person, or simply meeting new documentary filmmakers after being isolated for so long… The joy was palpable. There was magic in the air, more empathy, and an ease that you don’t always find at big networking events. However, meeting in person is a privilege many cannot afford, and that’s why robust online networking tools are necessary. It was very helpful to be able to watch films at home whenever we wanted, for those who couldn’t partake in the theater experience. My main question, which I keep asking after each film festival I go to: how do we continue strengthening this documentary community on a monthly or weekly basis, including with folks who are not attending festivals?

A possible answer to my question above can be found in the Alliance of Documentary Editors and the newly founded Documentary Cinematography Alliance, which both presented their work at the DOC NYC Pro conference. These entities – founded in 2018 and 2020 respectively – attempt to fight against the inequities of a system that still favors white, male, and privileged storytellers. Check out also the BIPOC Doc Editors database. They also attempt to organize vulnerable workers and standardize practices, in an industry where it may be considered normal to film for 12 hours straight in a dangerous setting and drive home exhausted from set. After the IATSE strike, it was powerful to see documentary professionals create their own building blocks for collective power. Also represented, the Documentary Producers Alliance, established in 2016, which explained its Waterfall Guidelines, essential in funding and distribution deals for documentary producers who often get paid last.

“Keep challenging the systems” Malikkah Rollins said at the end of one of the most powerful panels, on redefining “success” for documentary filmmakers, with speakers Iyabo Boyd (Brown Girls Doc Mafia), Jeanelle Augustin (NBC Universal), Michele Stephenson (Rada Film Group), and Chloe Walters-Wallace (Firelight Media). The honesty of the panel was refreshing, as lack of transparency is one of the biggest issues in the documentary space. (Shameless plug, this is why I started the Creative Distribution podcast). Some gems from the panel: “The award industrial complex is about money and how you campaign to get it. If your sense of validation comes from Oscars or awards, it’s going to be a rough road” (Michele Stephenson). “Grants can only take you so far, the funding model is broken. Let’s demystify success in funding” (Iyabo Boyd, who also did a great panel on Kickstarter). “Funders change, but your community is forever. Sometimes that’s your beginning space” (Chloe Walters-Wallace). “I started my career at Sundance, saw all the applications and so many BIPOC and female films were rejected. I saw there was an institutional problem. But power structures shift” (Jeanelle Augustin). Last but not least, Michele Stephenson asked the crucial question, “How to sustain and nourish that ecosystem? How can we take the model of underground hip-hop to film, for example, and create an ecosystem that feeds itself?” (These are all paraphrased from my notes).

Some practical advice felt familiar for the artists-as-entrepreneurs, but bears repeating: be very intentional in your approach and when trying to get  a project off the ground. A collection of advice: “research is not expensive. Do your homework and read through who is there [at an event], memorize their faces. Give yourselves a reason to be there. Documentary is a very social community”(Iyabo Boyd). “For many years I built relationships with production companies myself, without an agent, by working at those companies (…) I did my homework to see who works where and who does what” (Neha Shastry, All In: The Fight for Democracy). “I answer cold LinkedIn notes if people have done enough of their homework. If they reach out about something vague, I don’t” (Julie Anderson, Dreamland: The Burning of Black Wall Street).

Whether it comes to funding, distribution, producing, etc. It is so frustrating to see talented documentary filmmakers all competing for a meager piece of the pie. Many industry talks I attend get very irritating, with the standard advice about finding funders, pitching, getting your career off the ground, when the power structures are so deeply broken. There was a resounding cheer when Duty Free director Sian-Pierre Regis said, “Those institutions hold so much power and for me, it was about rebalancing the power. I knew we had a strong story and following. You need to show up to a conversation with something to balance the power. We need to be more transparent together. The money offered was good, but I knew others who got more money and had less buzz than us, so I said I know you offered twice as much to these other people. I proved to them that we can do it on our own terms as filmmakers,  you can leave the experience feeling full. Artists are taught to compete, but we have to remember, we have what they want!”. Let’s share numbers, let’s talk openly about these issues, and join and support the collectives working hard to build communities.

If you have ideas or comments on how to improve the documentary space, please sound off in the comments! 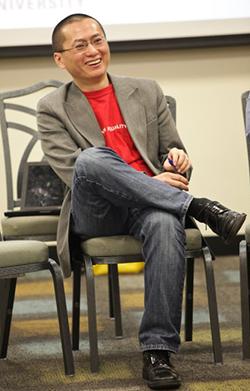