In defense of Miranda and Che in And Just Like That 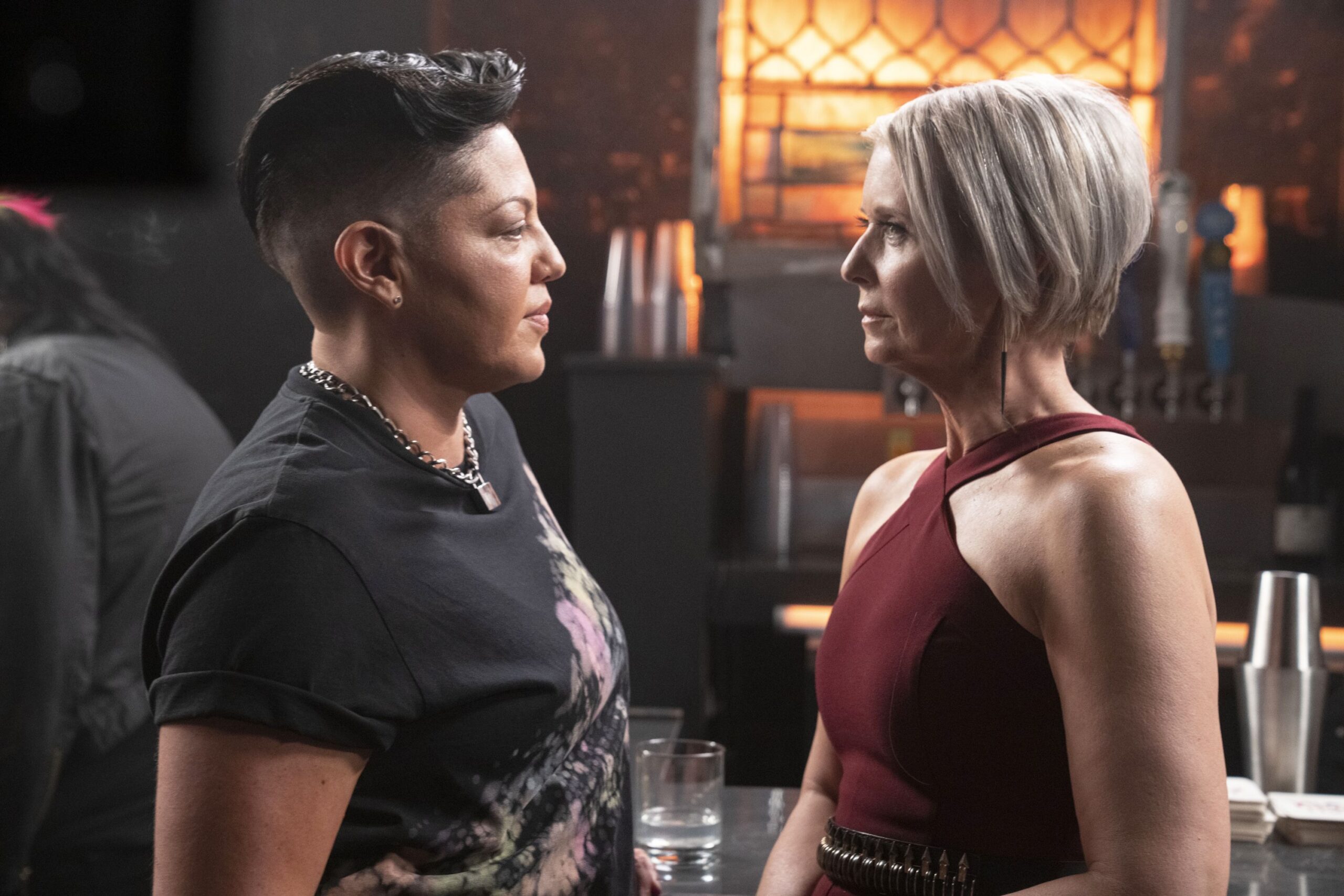 I am baffled by all the hateful comments and backlash against Miranda and Che – spoiler alert if you have not watched the series avert your eyes now – who get it on, and fall in love on Sex And The City‘s revival And Just Like That.

Don’t get me wrong, there’s a LOT to hate about that reboot. I almost didn’t finish it. The second half was stronger though, and I actually enjoyed it, once the shock of reuniting with old friends who all seemed out of place with the world had waned a little.

So, back to Miranda. Most of the backlash centers on her sudden decision to leave everything behind to “laugh in an audience” and follow Che, Carrie’s boss at the podcast, a nonbinary successful comedian played by the fantastic Sara Ramirez. Sure, Miranda is acting like an 18-year-old in love leaving poor Steve behind in a handful of episodes, for a person who, frankly, does not treat her right (“we are not dating”, forgets to respond to messages, announces a move during a horrendous musical number.) Che falls into the stereotype of the hypersexual queer and can be downright obnoxious (the memes about Che as this uber-successful egomaniac smoking weed in inappropriate places are all over the internet).

Folks acting as if Miranda owes anyone the burden of representing self-sufficient, smart women everywhere feels so deeply misogynistic.

But here’s the deal; Miranda earned her “mid-life crisis” as Charlotte offensively put it. The woman has given up enough, putting up with a frankly annoying kid and a life she doesn’t want, no matter how nice Steve is. She’s given viewers a lifelong supply of wit and sarcasm. Let her live a little. Folks acting as if Miranda owes anyone the burden of representing self-sufficient, smart women everywhere feels so deeply misogynistic to me.

SATC’s DNA has always been about deeply flawed individuals

A lot of the commentary about her “character assassination” centers on the fact that she would never make these life decisions so quickly, leaving everyone baffled around her. Have we watched the same show? It’s not my style to agree with the writers, but in this case, I agree with executive producer Elisa Zuritsky: Miranda has always been “tumultuous”. She never really knew where she stood with Steve. She almost did not want to have her kid, Brady. She made rash decisions sometimes, like the comment she made to Big at the rehearsal dinner in the first movie, which prompted her biggest fight with Carrie to date.

More than that, this show has always been about deeply flawed individuals. The reboot made that painfully obvious. And in real life, people don’t make sense and get on our nerves all the time. So why are we crucifying Miranda for being all over the place because she’s in love, after the woman has made every sensible life decision?

As someone who identified as straight for most of her life, I also had my own share of messy, awkward queer awakenings but I also don’t know where I stand most of the time and dare I say, I identified with Miranda. I was shocked to read that some writers who are supposedly progressive, who understood Miranda’s “baby gay panic”, could not extend her the benefit of the doubt beyond that. I get that a lot of folks don’t reject the storyline, but the way it was executed. Still, the amount of vitriol feels misplaced.

Some even defended Charlotte’s line “you are not progressive enough for this”. What? Charlotte’s rant was homophobic, out of character for someone who’s been so awakened by her own kid’s gender nonconformity, and offensive as a friend. As written about in Salon, the show’s reaction to Miranda’s sort of coming out was frankly disturbing. Charlotte’s rant only made sense when seemingly heartbroken, she asked, “why does everyone have to change?”, which rang true to her journey and to the reboot as a whole. Since when does falling in love have anything to do with being progressive? Agreeing with that just reeks of queer gatekeeping and frankly reminded me of moments when I felt out of place like I didn’t belong, like I wasn’t allowed to want anything else. Miranda may have a lot of issues but she doesn’t need to be more progressive to be allowed to explore her sexuality and fall in love with Che.

Some also labeled as internalized homophobia the fact that Miranda said she’s not necessarily into women, just in love with Che, as repeated to Steve by Carrie. I take issue with that. Miranda did not say she was not queer. She just didn’t label herself as gay or lesbian, nothing wrong with that. Maybe she’s pansexual and not into women per se, who knows, also maybe she’s just still figuring it out? Miranda should not have to label as anything to deserve queer love. Moreover, Che being non-binary renders the point about being into women or not totally moot. I get that the lack of representation makes us all aching for more, for better. Especially regarding Che who as the first nonbinary character on the show really deserved better than this on-the-nose, obnoxious writing. But again, this show has always been about anti-heroes (Carrie being one of the most irritating characters on TV). In real life, we all know someone as annoying as Che and wonder why our friend fell for them.

I’m perplexed by people saying the show rushed to make Miranda something she wasn’t and asking if Cynthia Nixon’s own queerness prompted the twist. I personally always found troubling the fact that despite the actress’s own life experience, and Miranda’s clear dissatisfaction with her relationship with men, SATC never explored that arc for Miranda. It felt perfectly in character to me that she’d want something else so much that she’d fall headfirst into it. Again, perhaps because I identified too much with that. And what if Cynthia Nixon peppered in some of her own stuff? Actors borrow from their own lives all the time, and after decades of inhabiting Miranda, I think she’s allowed and has an idea or two about who Miranda is. Her arc could have used more finesse – a metaphor for the whole show – but her erratic behavior rang true to me, and I’m just waiting to see how she will deal with the consequences.

Dealing with life’s messiness and humiliations

What did feel out of character, and was deeply disappointing, was the show’s beginning which showed Miranda acting as a Karen with her racial micro-aggressions and white-saviorism. Even if showrunner Patrick Michael King defended that storyline as Miranda being self-aware and learning, I was baffled that she could be so clueless. As many commentators have pointed out, I also never understood why Dr. Nya Wallace, her teacher at Columbia, played by the coolest Karen Pittman, would want to hang out with her. That relationship felt forced by the writers to give Miranda’s Karen moments a redeeming arc, and one of the much written-about clumsy attempts at making the OG characters more inclusive. By contrast, Charlotte’s relationship with the other Black woman on the show, Lisa Todd Wexley, played by the radiant Nicole Ari Parker, felt a lot more organic. The women were also more on an equal footing, even in their attempts at navigating the racial dynamics. Charlotte, surprisingly, fared a lot better in all the cringe-worthiness. Perhaps because we knew she was more conservative to begin with but also because she did try to learn and grow in a way that felt more true to her character (that argument with Miranda aside), whether through her friendship with LTW or with her gender non-conforming kid, Rock.

Samantha would NEVER no matter how mad she was, not be there for her best friend during the biggest event of her life

You wanna talk about out-of-character bullshit? Instead of piling on Miranda’s decisions, let’s talk about the cop-out of having Samantha stay away from her friends, texting Carrie back immediately all the time but just not being ready to meet in person. Samantha would NEVER no matter how mad she was, not be there for her best friend during the biggest event of her life (spoiler alert Big dies). She was always the most loyal, non-judgemental friend, and while it could make sense that she’d want a break, it was deeply out of character for her to send flowers but not show up at Big’s funeral, and stay away after that. Of course, Kim Cattrall refusing to come back made this a writing conundrum, but if we’re going to talk about character assassination, I think this is it.

Anyway, I can’t seem to find a better way to end this rant than by quoting the fantastic article by Alex Abad-Santos at Vox which summarizes the polarizing yet fascinating appeal of the show: And Just Like That finds the demented comedy in life’s humiliations. The Sex and the City reboot isn’t just about being fabulous. It’s about reckoning with your obsolescence.”

Why it’s okay to be obsessed

What reading 1,000 fan fictions in a year taught me